Malangas is one of the coastal municipalities of the province located at its southwestern flank. Facing the smaller Dumangquilas Bay, the town is endowed with a smaller group of islands featuring white-sand beaches. Malangas offers an island-hopping activity that you can enjoy for a day. Luckily I knew a local, Ms. Jonna Balagon, a dedicated educator, and she was able to arrange a boat day tour in her beloved Malangas.

Arriving at night from Ipil, the capital of the province, I stayed in La Dicha Lodge, where I also had my late dinner in their in-house cafeteria. My room in La Dicha lodge offers basic amenities that are ok for me. I had a huge mattress, a clean bathroom and since it was raining that night, I do not need to turn on the AC unit. I slept peacefully with the calming sound of rain. 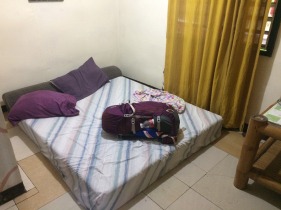 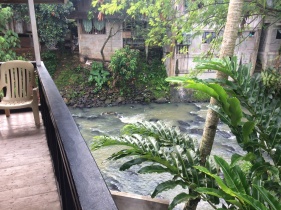 I checked out early and transferred to Ms. Joanna’s home where she had me finish a hearty breakfast. I met her dear mom, Ms. Julie Balagon, and her sister too. They joined us in the island hopping. We left their homebound to the where our assigned boat is docked. Chartered a motorcycle, we arrived on a stony beach and a white outrigger boat is waiting for us there. Momentarily, the engine roared alive and we are on our way. In less than an hour, we will reach our first destination.

We visited Muyong Island – privately owned, however, they allowed tourists to visit. We are welcomed by a long stretch of cream-colored sandy beach. Dry white corals also litter the beach. There are huts that we can use. That day, we are the sole visitors on the island. 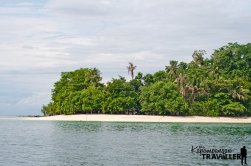 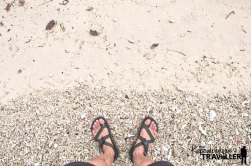 We moved to Nipa Nipa Island before noontime. This island features a more fine and whiter beach. I liked it better here. We arrived there with a family already occupying the other side of the beach. They are already enjoying their meals together while sheltered under the trees. I immediately frolicked around and dipped on its cool and clear waters. Rain clouds start to form afar and we hurried to the next destination. 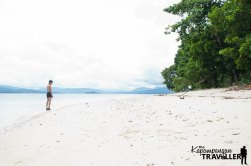 In less than 20 minutes we arrived in Kigay Sandbar, however, it was high tide. The stilted structures seem to float above the inundated sandbar. We jumped out of the boat and swam to reach the sandbar. It was roughly waist-deep however, I can feel the finer sand on my submerged feet. We explored the floating structure and took pictures from there. Its roof deck is flooded with rainwater. I tried my snorkel equipment here and have seen many camouflaged fishes, crustaceans, and starfishes.  Warned by the looming rain, we hurried back to the mainland.

After preparing my departure, I sadly bade goodbye to Joanna’s family. Before I finally leave the town, She escorted me in their Municipal Hall and was able to meet Hon. Tata Baquiat – their supportive mayor. It was another unforgettable experience and an honor to exchange thoughts and ideas with Mayor Tata. Finally, I was on a chartered motorcycle and sped off to the Diplahan terminal. I am thankful to Ms. Jonna as she is the one who arranged my tour in their lovely place. I am wishing to be back and experience the laid back vibes there.

The Municipal Hall of Malangas Facade 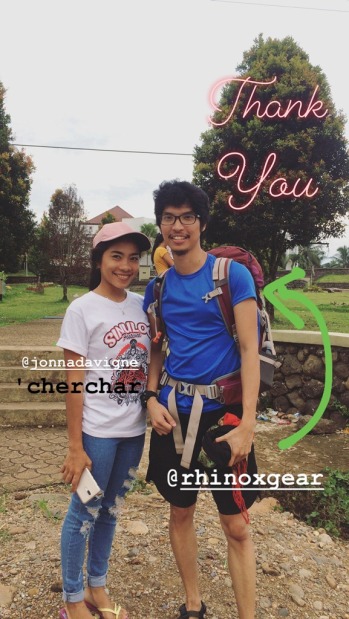 With our dearest Mam Jonna aka ‘Cherchar”

From Diplahan, I took the two-hour bus ride back to Ipil. Arriving at their central terminal, I walked to my next accommodation, Casa Mea Hotel. It is located near the Ipil Rotunda Obelisk. After checking in, I rested a bit, took a bath, and prepared myself to explore the night scene in Ipil. I chose an AC Double Room with private T&B. Room amenities include a TV set, dresser, telephone, hot shower, two towels, and coffee/tea set.

With the recommendation from Mr. UJ Almocera, one of the established bloggers in the region, I found myself in front of Mi Jardin – a buffet restaurant. After scanning the dishes, I confirmed my seat and enjoyed my heavy dinner, then continued to explore the town on foot. I noticed a lot of outdoor balut kiosks, where vendors would set up modest tables and chairs at nightfall. This is not typical of where I reside.

The following day, I met my driver bound for Titay. After driving for about an hour, we arrived at the Titay Public Market and changed the motorcycle since we will be passing winding roads to Tagbilat Falls. Luckily, he knew as well the trail and he was able to guide me to the catchbasin of the falls. The trek took me less than half an hour, and the momentarily, the view of the curtain waterfall emerged in between thick bamboo clusters. The Tagbilat Falls or Malagandis Falls features a wider cascade that is actually larger than its height. The roaring side and burst of wind emanating from the basin were therapeutic for me. I immediately ran to its catchbasin and balanced over exposed rocks to get a better vantage point of the waterfalls. I chose not to bathe into and spent some time exchanging stories with my tour guide over a makeshift bench placed under the shade of swaying tall bamboos. 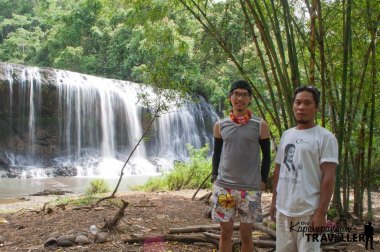 Picture with my tour guide 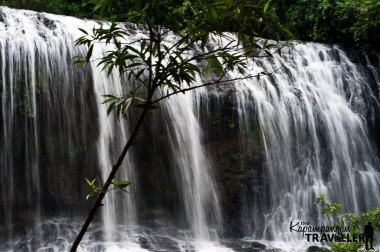 This island is one of the poster images of Zamboanga Sibugay’s tourism aspect. Featuring a teeming marine ecosystem coupled with hilly island core and creamy white sand beach, this island is a destination for both locals and tourists. The jump-off point is located in Barangay Buluan, about 15-20 minutes’ drive from Ipil proper. Initially, I was able to visit the island with the Ipil Municipal Hall staff. I got invited since one of them will be celebrating his birthday on the beautiful island. Arriving at the port, we approached our assigned boat via a long stilted footpath. The waters below appeared to be murky due to its muddy soil. On my second visit, we got on our assigned boat on a low tide, and we need to wade the shallow waters and muddy bed that swallows our feet ankle-deep, it is best this time to remove any footwear. The boat ride would last from 15-20 minutes depending on sea conditions. We arrived on a busy weekend and the island is already teeming with visitors. After securing our rented hut, I immediately went around the public area. One of the staff has shared a bit of the grim history of the island. He showed me a mound topped with stones believed to be a burial site of the rebels who occupied the island decades ago. 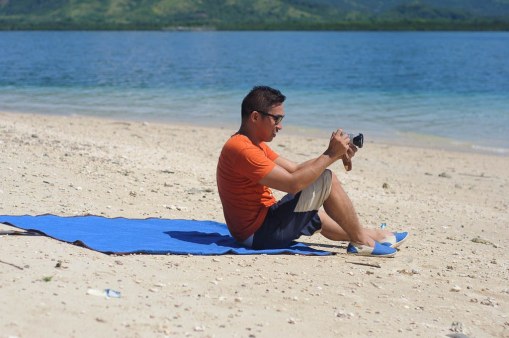 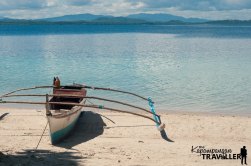 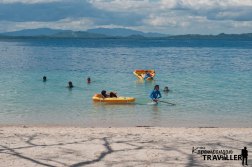 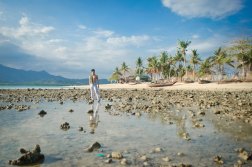 On its western side, you can try to snorkel and see the coral reefs on its shallow parts. I have tried to free dive here however the current proves daunting. I joined the team with their hearty lunch. I am so thankful to them inviting me and I enjoyed Buluan Island for free.

This is one of the elegant and stunning capitol buildings I have visited. The capitol complex is located on a hilly portion of the provincial capital where you can enjoy the panoramic view of the town. Its unique architectural features differ from the commonly greek inspired facades. The facade features three colors – yellow, blue, and maroon. The roof has a dominant conical structure in the middle, and the visible columns feature an ethnic style support structure jutting out that speaks of the province’s cultural background. 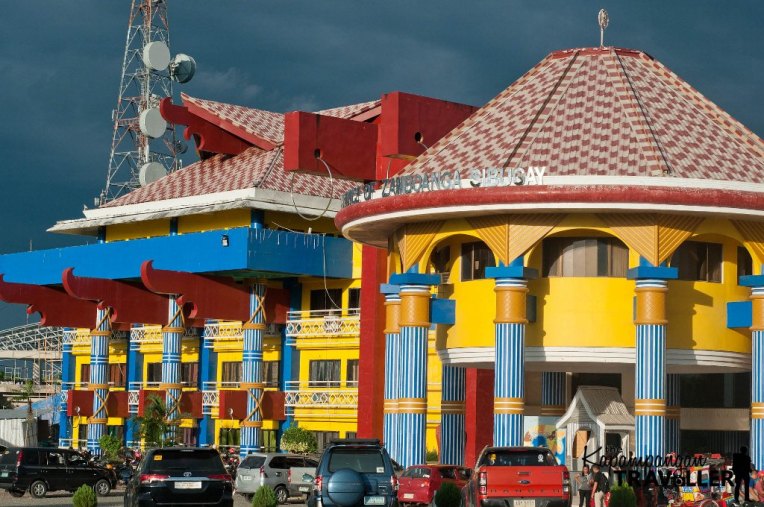 When I entered the building, I was awed by its spacious and high ceilinged open-air hall with a built stage. My favorite part of the capitol complex is the balcony at the other building where you can view downtown. As you explore more of the capitol building, its architectural features would certainly marvel the visitors.I am thankful to Sir Tino Ferio for bringing me here.

Ports of Entry: Pagadian, Zamboanga and Dipolog, take Ipil bound bus. Once at Ipil, you can charter a tricycle to bring you to the capitol complex.

Ipil is a crossroads to Zamboanga, Dipolog, and Pagadian. Exploring the Zamboanga Peninsula would definitely lead you to this recognizable obelisk. It is erected on a traffic roundabout, surrounded by commercial establishments, and was inaugurated last 2015. The obelisk is embellished with baybayin script characters that spell the name of the province.

Despite being a new province, the existing natural wonders of Zamboanga Sibugay are waiting for more visitors to see and experience. From the major thoroughfares of Ipil, I can see mountains that could be future mountain climbing destinations, many view decks and more waterfalls and beaches to open. The province has a promising future in terms of tourism since there are many islands that can be explored and developed. I am thankful for the locals who assisted and helped me in visiting their beloved province, and that yearning to return still linger until this day.